SHOW: London Road – Robyn Scott walks onto the stage as the aged Jewish grandmother Rosa (pearls, cardigan and all) and without saying a word has the audience in stitches.
CAST: Robyn Scott and Ntomboxolo Makhutshi
DIRECTOR: Lara Bye
VENUE: Old Mutual Theatre on the Square, until March 19

Everything about her performance is perfection – from the tight clutching of her purse to  her comical facial expressions,  her undulating voice which repeats words rapidly in succession and the way her body twitches involuntarily.

Equally spectacular is Rosa’s new friend and neighbour Stella (played by Ntomboxolo Makhutshi), who Rosa eventually figures out is a Nigerian drug dealer.

Written by Nicholas Spagnoletti, London Road is a play  inspired by the Jewish and Nigerian stereotypes that propagate the promenades of Sea Point in Cape Town.

Only the characters that Spagnoletti presents through  endearing vignettes are much more than stereotypes – they are both delightfully flawed and funny in their own right and they both find an unlikely (but lasting) friendship in one another.

A table,  two chairs, the odd tipple from a glass bottle and the frequent cup of tea are the only props on stage, yet  the fullness of Scott and Makhutshi’s performances  make the sparse stage setting  irrelevant.

London Road  hits home because it has a tendency to take the audience member down their own path of self-reflection about family, friendship, loss and death.

There are some very poignant and sad moments, but tying these together are a series of absolutely hilarious moments, from Stella revealing the sordid details of her dodgy clients to rude card games and  enjoying the “simple and fantastic joys of people watching” with Rosa’s invasive binoculars.

Subtle dialogue, loaded with meaning and emotion, has half the audience in tears at  the end.

No wonder then that both Scott and Makhutshi have been nominated for Fleur du Cap Awards in Cape Town for their performances.

This marvellous combination of an excellent script and great direction by Lara Bye is not to be missed. – Natalie Bosman 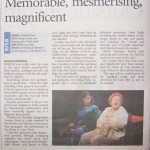