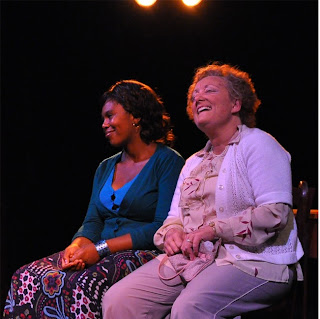 (Pic by Christine Gouws: Nthombi Makhutshi as Stella and Robyn Scott as Rosa)

London Road is currently one of the hot contenders for a Standard Bank Ovation Award and rightly so. It’s certainly creating a buzz here at Festival. Sometimes pre-hype – everyone telling you it’s the most fantastic thing they have seen – can put a show at a disadvantage because you go expecting the impossible.

Not so with London Road which offers an incredible performance from 37 year-old Robyn Scott as the outspoken and insatiably-curious 78 year-old Jewish granny Rosa whose life is quietly but inexorably drawing to a close. Putting in an equally impressive performance, and supporting Robyn to the hilt, is Nthombi Makhutshi as the drug-dealing Nigerian who becomes Rosa’s closest friend and confidante.

Speaking from experience, I know the rigid control one has to exercise when playing a character far older than oneself. And in Robyn Scott’s case, she has Rosa’s breathing disorder to contend with – and this she handles flawlessly.

From the moment we meet the wheezing Rosa as she wanders into Stella’s flat to find out about a burst pipe, she holds the audience’s attention with every gesture, ironic snort, gutsy laugh or vague reminiscence. Sometimes the thought processes take a little time as she gazes into space waiting for the memory to click in. Then there’s the delightful “No, no, no, no, no, no, no, no, no” – just in case you didn’t catch it the first time!

Rosa is an example of so many elderly people living on their own or in old-age homes in South Africa with their children having emigrated and very few friends still left alive. But Rosa’s a fighter – she grabs life with both hands. Still appreciating a beautiful body, she invites Stella to use her binoculars to peer at the young man in the flats opposite. And there’s nothing a good tipple won’t cure!

It’s definitely Rosa’s play but Nthombi Makhutshi is a perfect foil as the feisty Stella who is big-hearted and begins to care for her new friend with compassion and affection. The conversations they have are filled with fun and laughter and the occasional argument is soon dissolved – usually through some caustic comment from Rosa.

National Arts Festival Director Ismail Mahomed sums it all up perfectly: “A beautifully written script performed magnificently by two very talented women and directed with such beautiful eloquence. This play raises the bar on new South African writing for theatre.”

Raising the bar on writing, it certainly does. Working from Cape Town playwright Nicholas Spagnoletti’s initial script, director Lara Bye further developed the work for the stage through improvisations in rehearsals. One comes out of the show moved to tears in many cases, but also with a sense of deep fulfilment that you’ve seen a special piece of theatre. – Caroline Smart