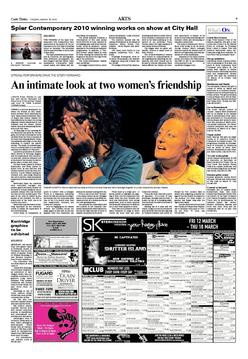 THERE’S a nervous familiarity between the women as they stand, bench between them, admiring the view. Stella smiles tentatively, wary of Rosa’s easy chatter. Despite the vast differences between the strong Nigerian woman abandoned by her husband and the elderly Jewish widow, their slow blossoming friendship is all they have.

As Rosa digs in her handbag for the bread she has saved for the seagulls, the trivial conversation turns carefully from the view, to matters of the heart and missing family. Stella, once guarded and angry, turns, face softening, to comfort the elderly woman. The small, yet powerful gesture of a caring hand on a shoulder captures the essence of this story.

Lara Bye’s production of London Road, written by Nicholas Spagnoletti in collaboration with the director and cast, takes an intimate look at the lives of two women thrown together after a brush with crime.

We meet Stella, played by Ntombi Makhutshi, and Rosa, played by Robyn Scott, as they discover that Stella’s humble home has been broken into. A poor woman, paying exorbitant rent, and doing whatever she can to survive, Stella is instantly suspicious of Rosa’s presence in her flat.

Makhutshi plays the character with controlled strength, she strides, glares and leans heavily on the back of a chair, sizing up the inquisitive woman who has wormed her way into her private space. The pain in her eyes is evident as she speaks of her husband, but with a sharp suck of her teeth, she is in control once more.

Makhutshi’s performance is stirring, especially as her character comes to realise the importance of the new friendship.

Scott’s Rosa, in comparison, is quick to connect with a stranger. There is a desperate loneliness about the way she invites the Nigerian woman into her home and takes care of her. It is clearly more than just neighbourly curiosity, she craves the company.

Scott is engaging as the elderly woman. She shuffles across the stage, gapes in awe and, as she disappears back into memories, she sweeps the audience along with her.

From a cup of tea with “bickies” to the tissue tucked up her cardigan sleeve, Scott creates a beautifully detailed portrait of a woman as real as our own grandparents.

She captures the vulnerability and wry humour of her character completely. Rosa’s frank observations create just the right amount of levity to balance the pathos of the show.

While there is a rough plot – it serves mainly to highlight the passing of time. It is the characters that really drive the story forward and Scott and Makhutshi, both strong performers, pour so much emotion into Rosa and Stella that it’s difficult not to care what happens to them.

They have such presence that the silent moments on stage at times convey far more than any lines could even attempt.

This is far more than just a story of opposites – it’s a story of loss, loneliness, strength and survival. It is also the tale of a changing neighbourhood and the shift in attitude of its residents.

Making use of a table and two chairs, Craig Leo’s set is uncluttered and combined with emotive lighting by Faheem Bardien and sound by Braam du Toit, London Road is awash with lingering, powerful images of the two women in relation to one another. It’s those tender vignettes that linger long after the lights have faded.