Argus Tonight – “On the road of life, expect detours”

On the road of life, expect detours

Sea Point is a unique place. If you’ve lived there, you know why.

There’s the incongruous sense of safety you feel as you walk along the Main Road at night, even as you wave at the drug dealers, taxi gaatjies and rent boys you’re not sure how you know.

There’s the comforting greenhouse heat of sunny days on the Promenade as you sidestep the poodles and their puddles. And then there’s the wildly varied cultural demographic that runs all the way between High Level and Beach roads.

This is the backdrop against which the humanity of London Road plays itself out. Rosa (Robyn Scott) is an old Jewish lady whose husband has died and whose children have emigrated. She busies herself with the affairs of her neighbours, even going so far as to use binoculars in keeping up to date with happenings.

Her “curiosity” leads her to a meeting with Stella, a Nigerian woman living close by. Stella’s small flat has been broken into and ransacked. As they get to know each other’s strange ways, they find common ground and an unlikely friendship is formed.

The play is structured as a collection of scenes rather than following a conventional plot. These vignettes provide insight into the characters and their histories, while little touch-points convey the progression of the friendship.

Ntombi Makhutsi is sultry, sardonic and sassy as Stella. She’s a bubbling pot of emotion throughout the play. And, I’m no expert on Nigerian accents, but it sounds pretty damn good to me.

Scott, as she so often does, steals the show. There are echoes of the vulnerability and humour of her performance in last year’s Elizabeth, Almost By Chance a Woman – as if Elizabeth has aged and moved to Sea Point.

There are moments when Rosa threatens to go over the top, but Scott brings her down to earth with little details, like physical and verbal tics.

Go to London Road. It’s worth the journey. 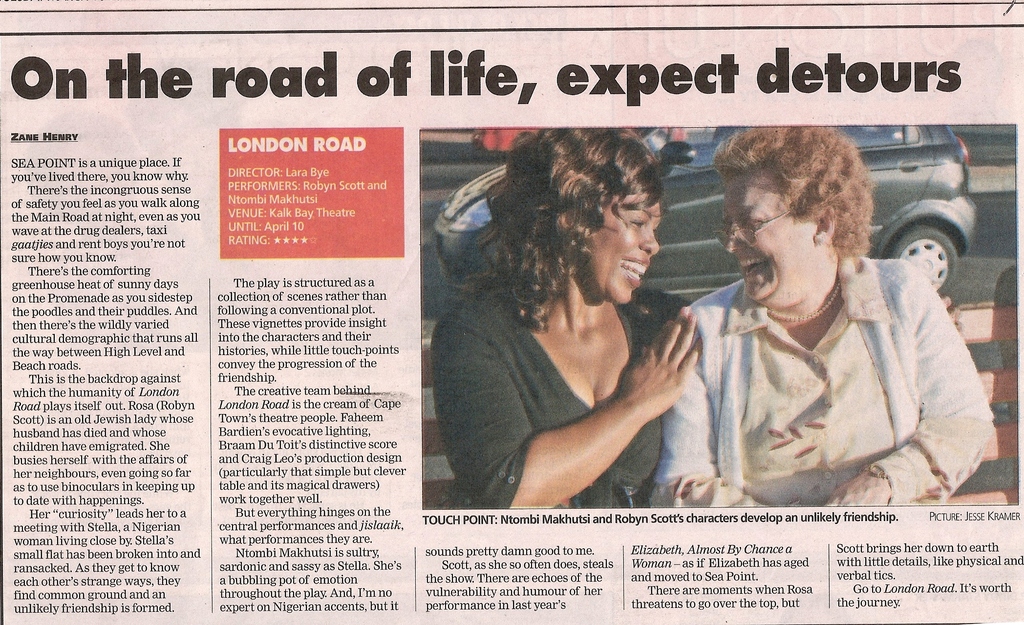