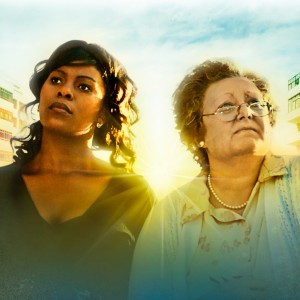 The moving, poignant story of the unlikely friendship between two women – neighbours in a seaside block of flats in Cape Town. Rosa (Robyn Scott) is an elderly Jewish widow. Stella (Ntombi Makhutshi) is a Nigerian immigrant cagey about the details of her import-export business. Their lives collide after an incident of violence, and they discover much in common — families scattered around the world, old grudges, lost loves and a fiery verve for life. It is both a funny and heartbreaking play that has had audiences laughing through their tears all over South Africa.

Director Lara Bye has precision-directed the piece with only the most essential of set and props. The powerful, detailed performances of these two transformed actresses draws you into their very real world. Robyn adds on thirty years to become Rosa, shocking at first with her brash nosiness but fully-drawn down to the last tiny tremor. Ntombi’s Stella, at first withholding, slowly builds a beautiful pathos, coming alive with humour and feeling as she cautiously befriends this lonely lady.

London Road premiered at the Kalk Bay Theatre in Cape Town in 2010 and immediately drew praise from audience and critics. It transferred to the newly opened Fugard Theatre and then toured South Africa over the next three years playing everywhere from makeshift home theatres to large festival venues. Robyn and Ntombi both won Fleur du Cap awards for their performances as did Nicholas for the script. The play also won a Standard Bank Golden Ovation award, a Naledi and the Olive Schreiner Prize from the English Academy of SA. In 2010 and for the first time in history, it outsold comedy at the SA National Arts Festival and was thetop-selling Fringe production three years in a row.

What the press have said:
“…simply brilliant… radiates beauty and empathy…” Sunday Independent

“a treasure… a warm, witty and wise drama” Business Day

“The humour is gentle, the drama and pathos understated … brought to
life by two formidable stage talents” Sunday Times